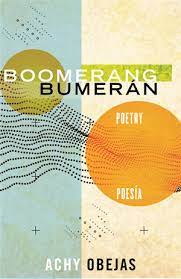 Please join us for a reading and conversation with Achy Objeas to celebrate the release of Boomerang / Bumerán. She will be joined in conversation by Ana Merino.

The event will be mostly in English with poetry readings in both English and Spanish.

Juliana Spahr, author of Well Then There Now says of the book, “The much-needed hope that comes with love defines these poems, shapes their lush epiphanies, their celebration of beloveds of all sorts, not just humans but also political convictions and the wide ranging geographies of various cities. These are the poems that we need so much right now as they remind us about the transformative promise that manifests when we brush up against each other and the inclusive, generous world that can come out of those moments.”

Achy Obejas is a Cuban-American writer, translator, and activist whose work focusing on personal and national identity has appeared in Prairie Schooner, Fifth Wednesday Journal, TriQuarterly, Another Chicago Magazine and many other publications. A native of Havana, she currently lives in the San Francisco Bay area.

Ana Merino is a Full Professor of Hispanic Studies and 2016 Collegiate Scholar. In 2009 Merino left her position at Dartmouth College to create the Spanish MFA program at the University of Iowa. She has published nine books of poems including Preparativos para un viaje (winner of the Adonais Prize in 1994), Los días gemelos (1997), La voz de los relojes (2000), Juegos de niños (winner of the Fray Luis de León Prize in 2003). Her poems have appeared in more than thirty anthologies. Merino has also written fiction, and extensive criticism on comics and graphic novels. She has been invited as visiting Professor to the University of San Gallen (Fall 2012) and to The University of Zurich (Spring 2019).