“At the Heart of Gold” Film Screening

“At the Heart of Gold” Film Screening 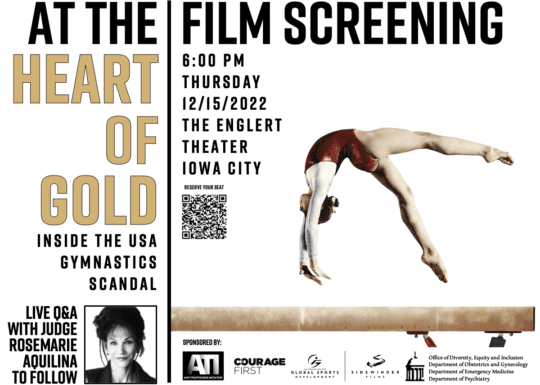 This feature-length HBO documentary takes an in-depth look at the decades-long abuse of athletes and students by the USA Gymnastics physician. Through interviews with dozens of survivors, as well as coaches, lawyers, and journalists, the film examines an environment in which young people spent their youth competing for victory on a world stage and a culture that silenced them for decades. Using a mix of original and rarely seen archival footage, the film puts the survivors’ stories at the forefront, following their fight for accountability from the powerful institutions that failed them. The screening will be followed by a live question-and-answer with Judge Rosemarie Aquilina, who appears in the film for her role in presiding over the criminal trial and sentenced the perpetrator to up to 175 years in prison for sexual assault.

Judge Rosemarie Aquilina earned her Juris Doctorate degree from Western Michigan Thomas M. Cooley Law School in 1984 after earning her Bachelor of Arts Degree from Michigan State University in 1979. She was the first female JAG Officer in the Michigan Army National Guard and retired with 20 years honorable service. After owning a successful law practice, she was elected to the 55th District Court she served 4 years as Chief Judge and Sobriety Court Judge and was then elected to serve as a 30th Circuit Court where she is in her 14th year. Judge Aquilina is a Law Professor at Western Michigan Thomas M. Cooley Law School and Michigan State University College of Law. She is a motivational speaker and author. She authored three fictional novels: Feel No Evil, Triple Cross Killer, and All Rise. Her memoir, Just Watch Me, was released December 2020 in partnership with Audible, Reese Witherspoon and Hello Sunshine. Judge Aquilina, is the mother of five children, has three grandchildren, and resides in East Lansing, Michigan.

This event is presented by the Anti-Trafficking Initiative (ATI), a medical student interest group, in partnership with Courage First – an abuse prevention initiative from At the Heart of Gold producers, The Foundation for Global Sports Development and Sidewinder Films – and with generous financial support from donors including the UIHC Emergency Medicine Department, UIHC Psychiatry Department, UIHC Obstetrics and Gynecology Department, and the CCOM Office of Diversity, Equity, and Inclusion. The films and program are part of a nationwide educational screening tour aimed at sparking meaningful conversations about abuse in sport and raising awareness about sexual trauma and trafficking, particularly on college campuses and in the athletics setting.

*Given the sensitive nature of the film’s content, attendees are encouraged to seek support at any time, either by speaking with any of the professional advocates who will also be in attendance at the event, or from any of the following 24/7 support resources: