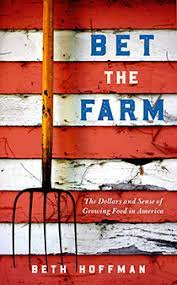 Please join us for a reading and conversation with Beth Hoffman to celebrate the release of her new book Bet The Farm: The Dollars and Cents of Growing Food in America. She will be joined in conversation by Chuck Offenburger.

John Piotti, President of the American Farmland Trust says of the book, “Honest and authentic, Beth Hoffman accomplishes what few authors who write about farms ever achieve: conveying amid the hard work and simple pleasures, the realities of running a tough business. Readers seldom get to view farming so accurately.”

Beth Hoffman has been reporting on food and agriculture for over twenty years, airing on NPR, The World, Latino USA, Living on Earth, and others. She blogged for Forbes as the Hungry Hack and studied the food system in depth as a student, fellow and co-lecturer at UC Berkeley’s School of Journalism. She has completed several documentary projects including a year cooking with immigrant women in their homes and telling their stories. She was an Associate Professor in Media Studies at the University of San Francisco for six years. Two years ago, in her late 40s, she and her husband left San Francisco and moved to rural Iowa to take over his family’s farm. Bet the Farm looks at the economics of American agriculture, told through Hoffman’s personal story of becoming a farmer.

Chuck Offenburger is a mostly-retired Iowa writer who had a 26-year career covering Iowa and its people for the Des Moines Register. His “Iowa Boy” column in the Register took him all over the state, across the nation and around the world. He now lives and writes at his “Simple Serenity Farm” outside the tiny town of Cooper (pop. 30, maybe) in west central Iowa, “surrounded by some of the most interesting farming operations you could find anywhere.”  His writing — on a wide range of topics — now appears first on his website www.Offenburger.com, which is one of the oldest news and opinion sites in Iowa.