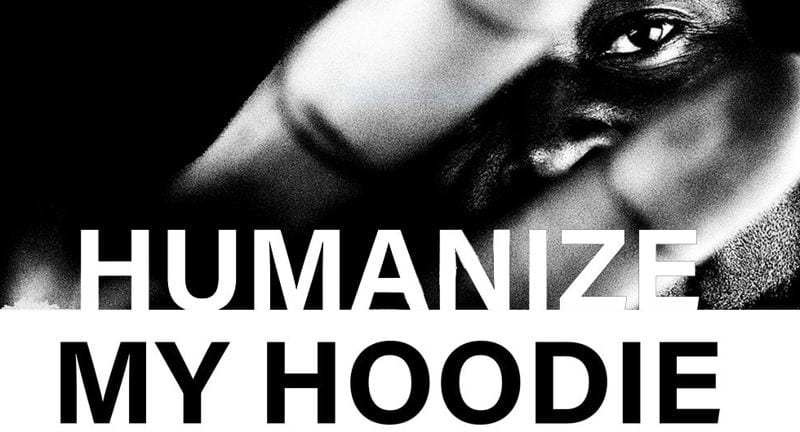 Join us in welcoming co-creators of the National Art Exhibit Humanize My Hoodie, Andre Wright and Jason Sole as they give a brief talk about their project and their journey. The HMH exhibit will be expanded from the gallery with extra pieces on display throughout the entire museum for 1-night-only.

IPR reports, “Andre Wright, CEO of the fashion label Born Leaders United, saw a post by his friend Jason Sole on Facebook. Sole wrote that as a culture, we need to stop stereotyping people based on how they dress. In that post, he pointed specifically to the hooded sweatshirt. Wright picked up the phone, called Sole, and the Humanize My Hoodie campaign was born.”

Having known each other since they were teenagers, the men reunited to work on the HMH project, pairing Andre’s background in art and clothing design with Jason’s teaching experience on social theory and philosophy to create the art exhibit, a private Ally Workshop, and a Community Screen Printing Workshop.

Sole made a commitment a few years back to teaching a class at Hamline University in a hoodie for an entire semester after many years of only ever wearing a suit and tie, “The kids I teach will be in positions of power someday. Some of them already are. They’ll be police officers, correctional officers, they’ll work in law enforcement. Letting them see me as their teacher they trust all semester in a hoodie can change unconscious biases we all hold – it might save the life of someone that looks like me on the street.” Sole is a professor, the author of From Prison to PhD, and a regular national keynote speaker.

A University of Iowa alumni, Wright studied Art & Design and has been working in the field locally and beyond for years. He’s used the popularity of his private business as a platform for the HMH voice and mission. You can find this on his clothing website above the hoodies he’s designed for the movement:

“The senseless killing of people of color has spurred conversations about society’s perception of the hoodie. Simply put: if you are black and you are wearing a hoodie, you are considered a threat. We want you to help us de-stigmatize clothing trends associated with people of color. The Humanize My Hoodie Project is a BORN LEADERS UNITED capsule collection. Rep it when you have a big event to show solidarity. On Behalf of BLU, thank you for joining the movement.”

The public is invited to join the museum in viewing the exhibit, learning more about the project, and to participate in a Q&A with Jason and Andre. Snacks and drinks will be served.

We thank the proud sponsors of HMH who have shown commitment to equity, justice, and art: MidwestOne Bank and ICR Iowa