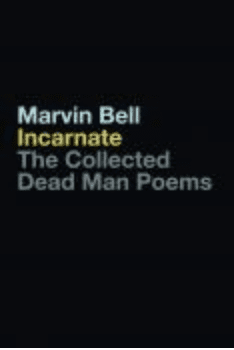 Marvin Bell, who taught poetry for over forty years at The University of Iowa’s Writers’ Workshop and was Iowa’s first poet laureate, will read from Incarnate: The Collected Dead Man Poems. “Marvin Bell’s Dead Man poems should close out any anthology of the twentieth century and open any anthology of this new century’s work. They change the game. They insist that we pay a new and different kind of attention.” –The Georgia Review

Marvin Bell was born in New York City 1937, and raised in rural Long Island. He attended Alfred University and the University of Chicago. He has influenced generations of poets and during his long teaching career at Iowa was the Flannery O’Connor Professor of Letters. Bell has published twenty-one volumes of poetry. He lives in Iowa City, Iowa and Port Townsend, Washington