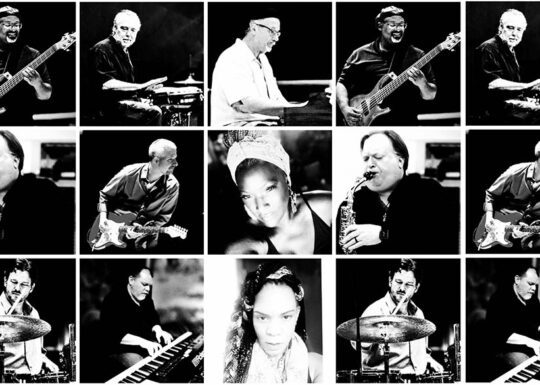 Shade of Blue fans have been gyrating to the band’s hypnotic and infectious grooves in the Midwest for over 30 years. Founded by guitarist and vocalist Dave Rosazza as a blues trio in 1989, Shade of Blue has evolved into one of the Iowa City area’s most beloved musical institutions as a featured act and as an opener for internationally acclaimed artists such as the Neville Brothers, Koko Taylor, and George Clinton. In 2021, Shade of Blue was inducted into the Iowa Rock ‘n Roll Music Association Hall of Fame.

Featuring the impressive vocals of sultry songstresses Simone Green and Joan Ruffin, the band has expanded its repertoire over the last three decades to include funk, R&B, gospel, and jazz while maintaining its blues roots. The versatile saxophone stylings of Saul Lubaroff and a rhythm section comprised of keyboardists Sean Seaton and Denny Ketelsen, bassist Ken Fullard, percussionist Paul Cunliffe, and drummer Matt Bernemann complete the sonorous tour de force known as Shade of Blue.

Expect a plethora of musical tributes to the likes of Aretha Franklin, Stevie Wonder, Bill Withers, and Steely Dan as well as original tunes to get audiences out of their seats and onto the dance floor at every Shade of Blue show.