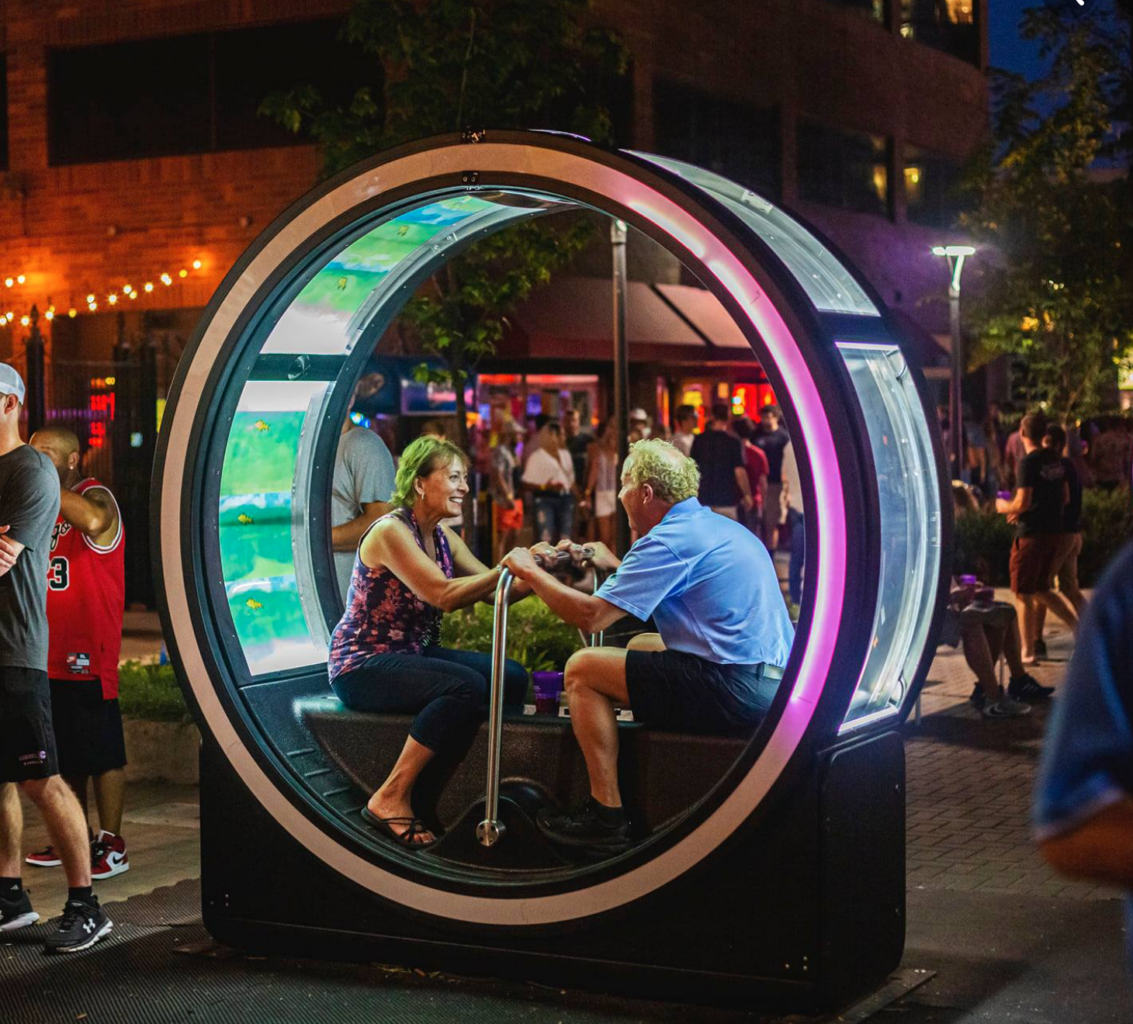 (Iowa City, IA)- June 30, 2021- The Iowa City Downtown District in partnership with the City of Iowa City & Think Iowa City will bring the international participatory public art installation, Loop to Downtown Iowa City’s pedestrian mall this summer starting July 9th. The installation that has traveled the world over the last four years will unveil new visuals and sounds for the first time in the United States at the Iowa City installation. The collection of twelve giant zoetropes will be located throughout the pedestrian mall delighting and inviting visitors to interact and play.

The traveling installation was first displayed as part of the Luminothérapie at the Place des Festivals in the Quartier des Spectacles in Montreal in 2016 and comes to Iowa City this summer as a way to welcome visitors back to enjoy all Downtown Iowa City has to offer in the summer as festivals, events and businesses resume hours. “The Iowa City Downtown District for many years has been focusing efforts on supporting and advancing culture and placemaking experiences throughout the downtown area. After 2020’s impact on visitation and events, we knew that this summer would be a perfect opportunity to bring in a fully immersive experience that normally could only be enjoyed in large cities. We are thrilled that this art piece will be a significant backdrop to the many events happening throughout July and early August, fully anticipating it will attract thousands of visitors”, said Director of Creative Services, Betsy Potter.

The inspiration for this installation is the zoetrope, a toy from the 19th century, that produces the illusion of motion by displaying a series of drawings or photographs in progressive phases. The Loop takes that concept and creates animated fairy-tale loops using visuals that celebrate literature. In order to activate these cylinders, visitors must pump the lever to get the cylinder to spin. Once the cylinder is spinning, it will light up and play musical movies, where the speed of images and music is based on how fast the lever is moved. The visuals pairs 12 illustrators who were inspired by great Québécois literary works and  the experience is complemented by a new soundtrack for each zoetrope, inspired by the theme of the animation. “Visitors should take the time to enjoy all 12 elements of the piece to engage with the full experience during both the day and night,” said Potter.

This free installation is open to the public starting July 9th, providing the perfect activity for families and those of all ages to visit Downtown Iowa City this summer. To see LOOP for yourself, visit the the pedestrian mall from July 9- August 10th.

Not only will visitors be able to experience this phenomenon themselves, but the Iowa City Downtown District encourages everyone to share the spectacle on social media, by tagging and sharing on instagram, facebook and twitter.