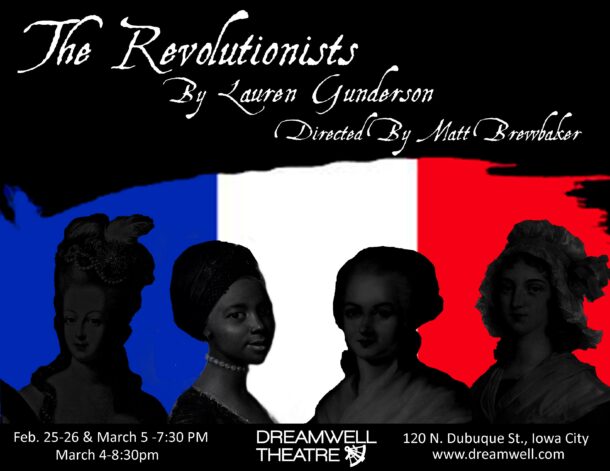 Dreamwell Theatre is thrilled to announce our return to live theater. This spring we will finally get to share our production of The Revolutionists: A Comedy, A Quartet, A Revolutionary Dream Fugue, A True Story by Lauren Gunderson, directed by Matthew Brewbaker. Performances will be held February 25-26 and March 4-5 at The Artifactory (120 N. Dubuque St., Iowa City, formerly Public Space One).

Symopsis:
Four beautiful, badass women lose their heads in this irreverent, girl-powered comedy set during the French Revolution’s Reign of Terror. Playwright Olympe de Gouges, assassin Charlotte Corday, former queen (and fan of ribbons) Marie Antoinette, and Haitian rebel Marianne Angelle hang out, murder Marat, and try to beat back the extremist insanity in 1793 Paris. This grand and dream-tweaked comedy is about violence and legacy, art and activism, feminism and terrorism, compatriots and chosen sisters. It’s a true story. Or total fiction. Or a play about a play. Or a raucous resurrection…that ends in a song and a scaffold.