The Writer’s Crusade: Kurt Vonnegut and the Many Lives of Slaughterhouse-Five

The Writer’s Crusade: Kurt Vonnegut and the Many Lives of Slaughterhouse-Five 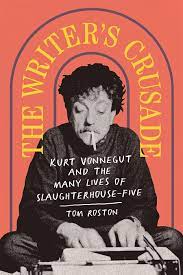 Join the Kurt Vonnegut Museum & Library on Tuesday, October 12 at 6pm Central Time/ 7pm Eastern Time) for a talk about the legendary Kurt Vonnegut, as author Tom Roston presents his new book, The Writer’s Crusade: Kurt Vonnegut and the Many Lives of Slaughterhouse-Five.

Roston will discuss The Writer’s Crusade, and the role of trauma in war writing, with Iraq war veteran and novelist Matt Gallagher and author, teacher and one-time student of Vonnegut’s at the Iowa Writers Workshop, Suzanne McConnell.

You can get tickets for this virtual event here.

Tom Roston has worked as a journalist with The Nation and Vanity Fair, and was a senior editor at Premiere for more than a decade. His work has appeared in the New York Times, New York magazine, LitHub, and more. He is the author of two previous books, I Lost It at the Video Store: A Filmmaker’s Oral History of a Vanished Era and The Most Spectacular Restaurant in the World. He lives in Brooklyn.

Matt Gallagher is an Iraq war veteran and author of the novels Empire City, and Youngblood, as well as Kaboom: Embracing the Suck in a Savage Little War. He holds an MFA in fiction from Columbia and has written for The New York Times, The Atlantic, Esquire, and The Paris Review. For many years, he taught NYU’s Words After War writing workshop. He lives with his wife and son in Brooklyn.

Suzanne McConnell co-authored Vonnegut’s book on craft, Pity the Writer, and is fiction editor of the Bellevue Literary Review.  McConnell was a student of Vonnegut’s at the Iowa Writers’ Workshop from 1965 to 1967, when Vonnegut was finishing his masterpiece, Slaughterhouse-Five. Vonnegut and McConnell became friends, and stayed so for the rest of his life. She has published short memoirs of him in the Brooklyn Railand the Writer’s Digest, and led a panel at the 2014 AWP conference titled “Vonnegut’s Legacy: Writing About War and Other Debacles of the Human Condition.” McConnell taught writing at Hunter College for thirty years.  She lives in New York City and Wellfleet, Massachusetts, with her husband, the artist Gary Kuehn.