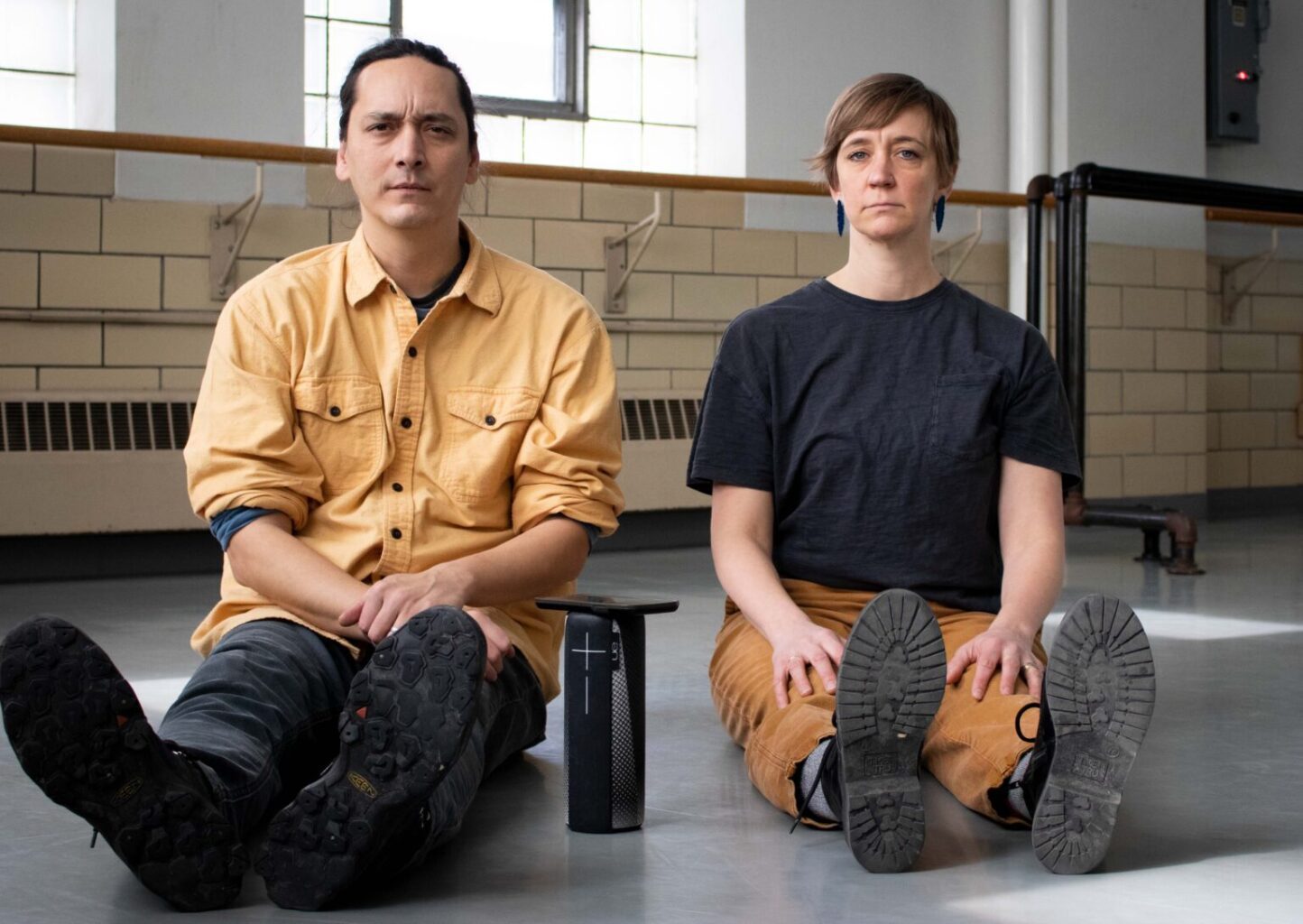 Exploring physical and verbal expressions of beginning, being, and ending, Unfinished Business is a collaborative performance by dance and theater artists Melinda Jean Myers and Kurt Chiang. The title suggests the dramatic intrigue of a cinematic thriller or anticipating the return of a star athlete. In reality, however, Myers and Chiang are interested in how the phrase applies to art and everyday life: “What is our unfinished business as artists, educators, and people?” In an attempt at an answer, they explore absurd manifestations of career goals, look back on regrettable behaviors of the past, and negotiate the messiness of current situations. Curiosity and mundanity are juggled between the performers. When the end goal is undefined, or undesirable, the two performers search for stakes in the funny, weird, and odd moments in between their best and worst selves.

Unfinished Business melds dance and movement aesthetics that the duo have individually crafted from their hybrid artistic practices. Movement, spoken text, and improvisation are used interchangeably to create a flexible world that seeks authenticity and liveness in the moment of performance. The “unfinished business” can easily refer to that night’s performance, as Myers and Chiang track new lines of inquiry in ever-changing circumstances.

“Finishing the Business” – a workshop in self-on-stage

Melinda Jean Myers and Kurt Chiang invite you to a workshop on movement improvisation, writing, and storytelling to consider how you experience the “business” of your life. Using the creative research of their two-person show, Unfinished Business, they will lead a process where your personal goals, daily tasks, body movement, and habit, are in conversation with outside perspectives and influences. Participants will explore physical and verbal expressions of the beginning, being, and ending while helping each other illuminate surprising parts of themselves.

No dance/theater experience is required. Registration for the workshop comes with a complimentary ticket to the performance of your choosing. Click HERE to register for the workshop.

Melinda Jean Myers is a dance artist, choreographer, and Assistant Professor of Contemporary Dance and Choreography at University of Iowa. She earned her MFA from University of Iowa (2012) where she received a Stanley Graduate Award for International Research and Iowa Arts Fellowship. She earned her BFA from NYU’s Tisch School of the Arts (2005). She was honored to perform internationally with the Trisha Brown Dance Company for four years (2006-2010), and currently re-stages their repertory. She created three new works as a devising ensemble member of Lucky Plush Productions (Chicago, IL) and toured nationally with the company for five years (2012-2017). As a member of The Cambrians, her collaborative work Clover (2015) was named one of The Chicago Tribune’s Top 10 Dances of 2015. She was chosen to produce her one woman cabaret greatBIGworld through High Concept Laboratories’ Sponsored Artist program at Mana Contemporary in 2014. The Chicago Tribune review mentioned, “Myers has proved herself a winning performer, boasting a brilliantly unstudied comic touch.” Her interdisciplinary dance works have been presented in South Korea, Germany, NYC, and throughout the Midwest.

Kurt Chiang is a theater artist, writer, and performer. He is Ensemble & Artistic Director Emeritus of The Neo-Futurist Theater, where he wrote/performed more than 300 very short plays in the prolific weekly show, The Infinite Wrench. Serving 12 years with the company, Kurt directed multiple premiering works, produced and curated The Neo-Futurist Kitchen Festival, led the restructuring and devising process of The Infinite Wrench, and co-created The Arrow, a performance aesthetic that subjects personal essays to spontaneous acts of inquiry and disruption (in collaboration with Lily Mooney). Kurt practices and attempts multiple modes of creating, performing, teaching, and one-off-experimenting, and has presented for and collaborated with multiple organizations and artists, including: The Arts Club of Chicago, Lucky Plush Productions, Mocrep, Woolly Mammoth Theatre, Abrons Art Center, Depaul University, School of the Art Institute of Chicago, Lucas Baisch, Hal Baum, Jenna Horton, and John Pierson. Kurt is currently developing Chicka-Dee-Dee-Dee!, an original short film on flora in the North American prairies.