The Retail Space Build-Out Grant program is part of several strategic investments that Downtown District leadership hope will respond to the weakened downtown economy after over a year of COVID-19 health, safety, and economic restrictions.  While the first-floor vacancy rate downtown still remains relatively low (4%), the business mix and character may change as a result of the COVID impact. Providing a diverse merchandise mix that appeals to both the community and University is a more pressing goal now more than ever for the organization.

“We continue to strive for balance,” said Nancy Bird, Executive Director of the ICDD.  “The vast majority of space interest is coming from national and local restaurant and food establishments — roughly 85% of the market.  In order to keep a mix of offerings downtown, the timing is actually really good to go out and incentivize new independent retail merchants and encourage them to give downtown a look.  Landlords in some properties are seeking soft goods as a preference and we have a host of really great offerings that we think could entice a second store independent or an emerging retail entrepreneur.”

The District’s retail investments are one element of a larger downtown recovery program that is addressed in the organization’s 2021 Downtown Recovery Brief.  Retail investments include: doubling down on recruitment efforts, support for prospects testing the Iowa City area market with  “pop-up” trials, pairing interested businesses with local retail mentors for guidance, and providing eligible tenants that meet the criteria of the District’s 2019 Retail Strategy with financial build-out support.  Once businesses sign leases, they will also be eligible for complimentary year-round soft-goods retail delivery and merchandise sales on the downtowniowacitymarket.com website.

“We’ve spent the last year working on a plan to rebound and position ourselves for new opportunities.”  Bird shared three key themes in the Recovery Brief that address the District’s work to “welcome, shape, and draw:” 1) strengthen inclusivity by creating deeper human connections amongst all downtown stakeholders; 2) advocate for public investment in properties and provide new retail services that plug gaps for owners, and 3) strengthen downtown as a destination and a four-season environment.

According to Bird, visitation is starting to return to Downtown Iowa City as the weather changes and health conditions improve. 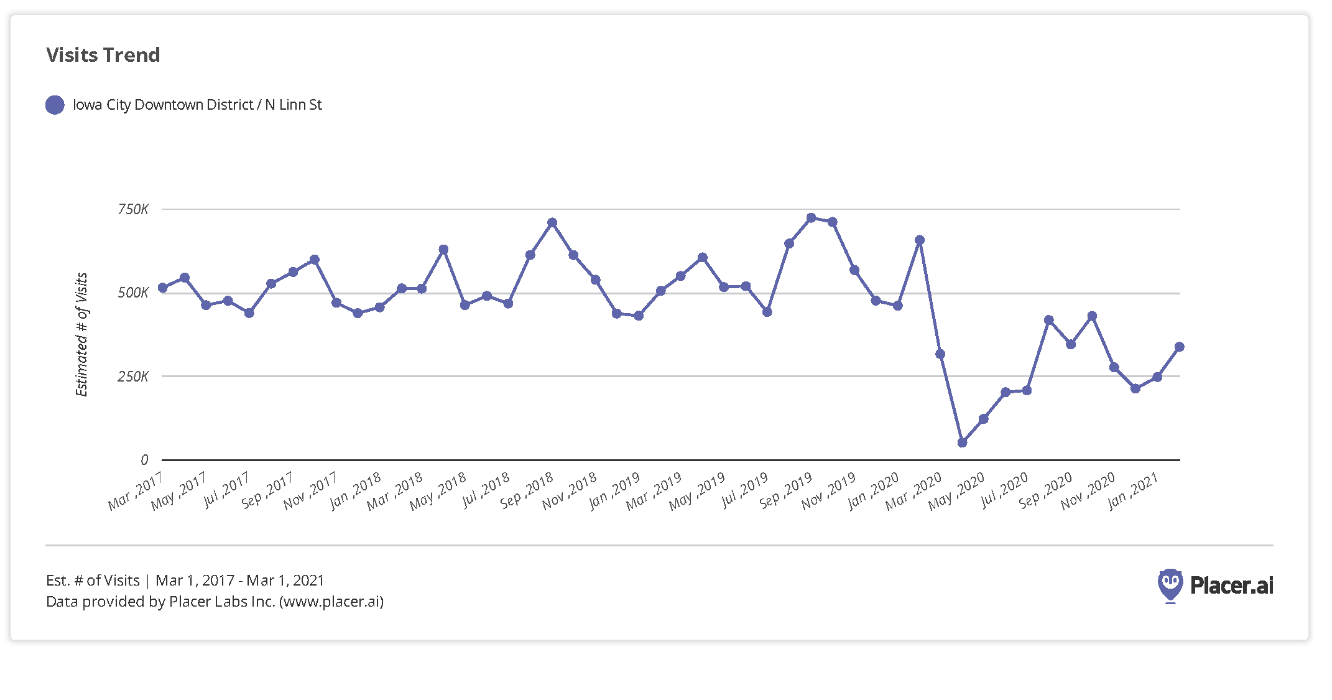 “For the Iowa City area to come back from a scenario like this is pretty incredible. The Downtown’s targeted investments and other funding coming in from the American Rescue Plan will be critical to spend well so that the entire community can come back better. We will be tracking our visitation closely to see where interventions work and will continue to press for transformative projects that strengthen our destination as a whole.”

For more information regarding the Downtown District’s retail investments and the Build Out Grant, find the full program details at downtowniowacity.com/dobusiness.