The Project Better Together team announced the results of the highly successful Holding Our Own shop local incentive campaign that ended on October 22nd. The campaign launched on June 22nd to incentivize shoppers to support locally-owned businesses in Johnson County, and to ultimately provide an economic boost for the region and small business owners. The campaign was supported by the City of Iowa City, Johnson County, West Bank, MidWestOne Bank, Hills Bank, GreenState Credit Union, CBI Bank & Trust, Great Western Bank, Two Rivers Bank & Trust, and US Bank.

“We are thrilled with the success of the Holding Our Own campaign and are proud to play an active role in helping remind the community that Johnson County locally-owned businesses need our support now more than ever,” said Project Better Together Director Mark Nolte. “When the team was developing a strategy to best encourage the public to continue spending in our community, we knew that the program we created had to be impactful, far-reaching, and fun. Johnson County community members really turned out and through this joint effort, the campaign generated an $823,000 boost. That’s the power of a great collaboration, and we’re now ready to roll up our sleeves and look ahead to see what we can do together next.”

The four-month-long campaign generated an economic impact of more than $823,870 in Johnson County through an integrated gift card incentive program that also leveraged money for Black, Indigenous, People of Color (BIPOC) and Immigrant business grants. The two components of the program worked hand-in-hand; a total of $51,950 for BIPOC business grants were set aside and partially raised within the overall Holding Our Own campaign. Each customer that spent up to $150 received a $20 gift card and was informed that their purchase also donated $5 back to BIPOC businesses for COVID-19 economic relief grants.

● Businesses impact: 160 received direct dollars, 33 of these businesses received direct BIPOC grants. *It is important to note that many additional businesses saw an impact from the program but it was not recorded where customers spent the dollars to be eligible for the incentives. 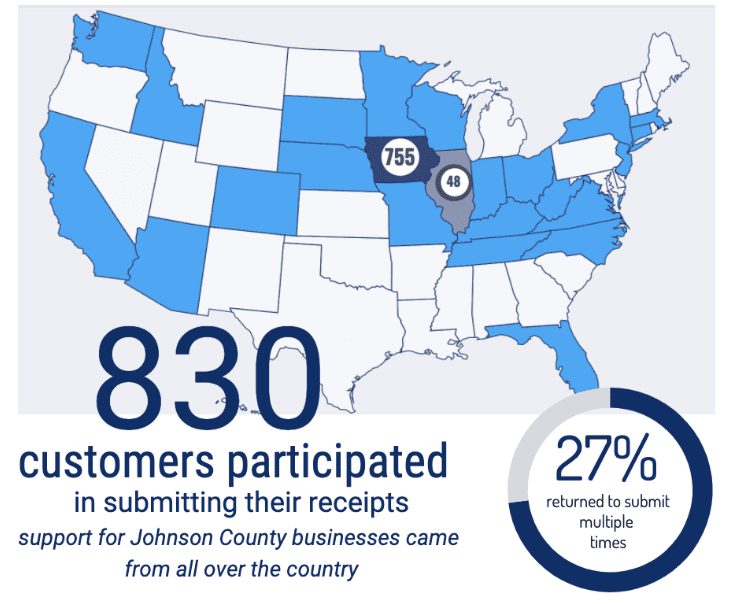